Who better to hear from than our volunteers themselves – find out more about the role they do and why they choose to volunteer with us.

Find out about our volunteers

We couldn’t provide the level of support that we do to people in our communities without the enthusiasm and dedication of our volunteers — many of whom are juggling studying, family, work and other commitments outside of their volunteering — and we are truly grateful for the time they give to help others.

Below are just some of our volunteers’ stories, the reasons they volunteer and how it has made a difference to their own lives. 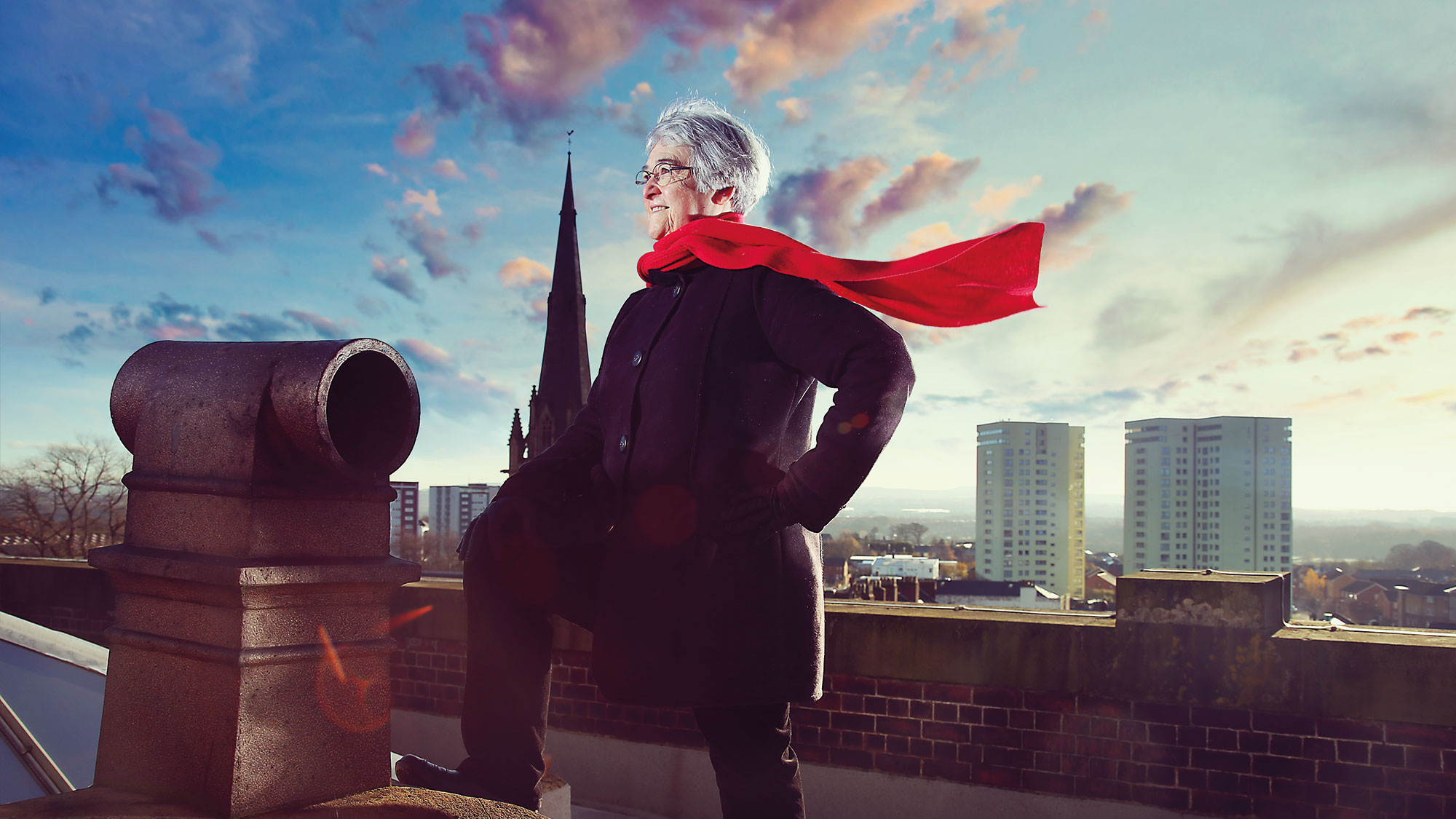 Noreen is one of the nicest people you could meet. She is a real inspiration — someone who is full of life and certainly likes to keep busy!

A former secondary school French teacher, Noreen is now the President of the Cercle Français of Ribblesdale and runs a French literature group from her home.

Noreen is a linguist and absolutely loves languages – she speaks French, Spanish, some Italian, Urdu and Russian!

She is also a pianist, sings in a local choir and is a member of a book group.

In between this and spending time with her four grandchildren and two step grandchildren she also finds time to volunteer as a Community Support Volunteer, regularly visiting an older lady to give her support and companionship.

‘I visit her every second week; I used to take her out for jaunts in my car and visit cafés for snacks. I also used to take her to the theatre or films which she really enjoyed. She’s not so good at walking now and sadly these trips have had to stop. So now I go round to her house and we sit and chat for two hours. We never run out of conversation.

‘I’ve been visiting her for ten years now and we’ve built up such a close relationship.

‘The best part of volunteering for me is hearing her say that I have cheered her up no end, and that this has been the best conversation of her week; she looks forward to seeing me. I feel like I am doing some good!’ What Bill doesn’t know about the high moors of the Forest of Bowland where he does his patrols isn’t worth knowing.

Bill, an engineer by trade and ex-Auxiliary Fireman, has been volunteering as a Countryside Ranger with Lancashire County Council for over thirty years.

He was a member of the Ranger Emergency Support Unit and regularly trained in mountain rescue and fire fighting.

In his role as a Countryside Ranger Bill has been involved in many duties ranging from patrolling the access areas on the high moors of the Forest of Bowland to litter picking in country parks. He has also led many guided walks and has run lecture sessions in navigation for the public. Bill is currently a leader for the Junior Rangers on Beacon Fell where youngsters from the age of 6 to 14 are encouraged to study wildlife and enjoy the countryside.

When Bill’s not on the high moors you can find him on his allotment, book collecting, spending time with his wife, children and grandchildren or doing something connected to model railways which he has developed a keen interest in.

‘There have been many memorable moments in my role but probably the most memorable was the Foot and Mouth epidemic of 2001 which placed a great strain on the countryside and Volunteer Rangers were used for many related duties.

‘The best part about volunteering for me is about being part of a team and encouraging people, especially youngsters, to enjoy and respect the countryside. I love being outside and teaching others about the great outdoors.’ Enthusiastic, warm, intelligent, witty and confident are just some of the words we could use to describe Becky — oh and so much fun to be around!

She really does have an infectious personality.

After joining a dance group and seeing what a difference it was making to her confidence and her life, Becky decided to train as a leader and now runs her own inclusive dance class, inspiring other people with disabilities (Becky has Down’s syndrome and a heart defect which has led to many operations).

‘You are doing it and you don’t realise you are in another world and I turn it into a passion and keep going. There are no obstacles for disabilities.

‘There are people out there who should be given a chance. This is where it begins for a lot of us.

‘Go out there, believe what your passion is, and achieve your reward.’ 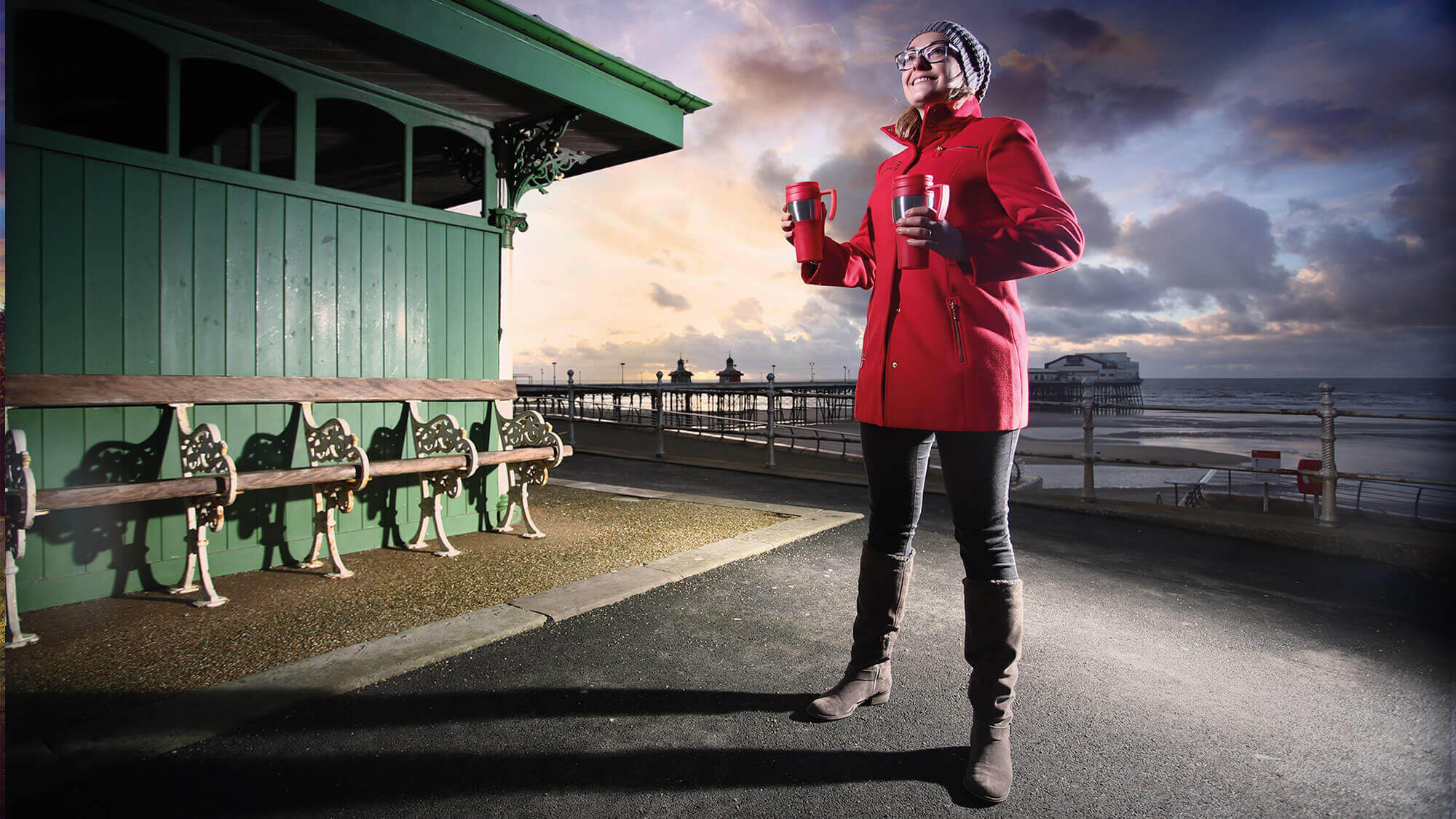 Vicky is a superwoman! We are not sure how she fits everything in – between looking after her two young children, working and studying, she still finds time to volunteer with a man who has dementia.

Vicky has been in her role as a Community Support Volunteer for over a year now and has been working with the same gentleman for that time, providing him with support and giving his wife some respite.

‘As I got to know him I discovered what a keen cyclist he was. But sadly we couldn’t arrange for him to continue cycling. Instead I came across a local singing group and asked if he wanted to go along. He loves it!

‘He really looks forward to going. I was worried that because of my other commitments there may be times when I can’t take him and I felt guilty about that. But I raised this and over the summer arrangements were put in place for someone else to take him so he didn’t miss out when I couldn’t go.

‘What I love the most about my role is the difference I feel I am making and the relationship we have built up. When we first met he was unsure who this new person in his house was; now he greets me with a big hug and that is so rewarding.’

Sarah is used to life in the fast lane – she was a commercial clothing designer to the high street for 20 years.

Although that wasn’t always the path Sarah had wanted to take. A talented show horse rider with a promising career, Sarah was attacked in her early twenties leaving her with permanent damage to her back and preventing from pursuing her dream job.

But Sarah’s love of horses has never left her and she now runs her own business specialising in horse products.

And despite her injuries, which impact on her daily life, there was no way that was going to hold her back and stop her from riding completely. Sarah’s stunning white horse Roland gives her a massive amount of enjoyment and he is even helping to manage her pain, as riding him for periods can bring some relief.

As a Rural Mounted Police Volunteer Sarah patrols the rural areas helping to keep our roads safe and supports the police in cracking down on crime in the countryside.

‘I’m a doing person and always dreamt of being in the mounted police but because of my back I am not fit enough to do two years on the beat.

‘I love volunteering; it has come at the right time in my life. If one car slows down because of me and Roll, others follow him.

‘I feel I am making a difference by keeping the roads safer and helping the police tackle rural crime so that the countryside remains a beautiful place to live — making it better for my children and other little kids; I have a reason to give back.’ 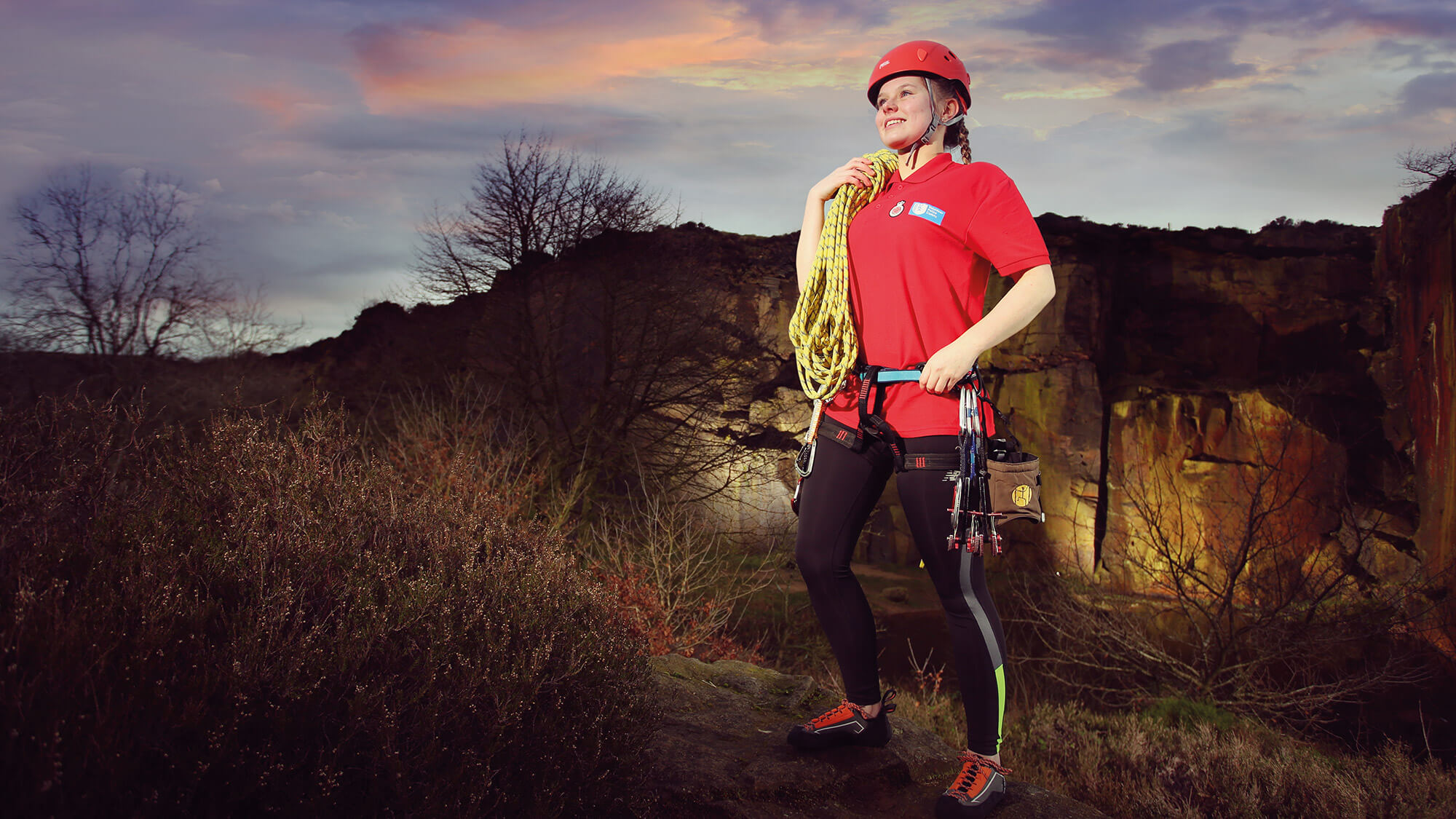 Cordelia was a Police Volunteer Cadet for three years before deciding to go on to become a Cadet Leader, supporting and mentoring other young people.

She likes to keep busy and is currently working as an apprentice while studying for her Level 3 qualification in Business Administration.

In addition to this, Cordelia juggles her volunteering with a part-time evening job.

A keen photographer, Cordelia enjoys hiking and taking lots of pictures when out and about, as well as baking, listening to music and spending time with her family and friends.

As a Cadet Leader, Cordelia feels it is her duty to be a role model to the cadets and gets involved in lots of different activities such as stewarding local events, helping the local neighbourhood policing team and getting involved in fundraising events.

‘Being a leader means looking after every individual cadet, helping them where needed and using the knowledge and experience I have to support them throughout their journey as a cadet and life.

‘I have the opportunity to inspire and make a real difference to young people struggling to find their place in their community. It has provided me with training and development on a personal level and has built confidence and leadership skills in me.

‘For me the best part about volunteering is very simple — it is the sense of doing good and belonging to a community which I have helped to shape. Community service has taught me all kinds of skills and increased my confidence massively. I go out there and think on my feet, work with others and create something from nothing – that’s what it’s all about. Volunteering for me is the ultimate exercise in democracy. People vote in elections once a year, but when you volunteer, you vote everyday about the kind of community you want to live in and that’s what I enjoy doing most.’ It never ceases to amaze us how much dedication our volunteer bring to their role on top of their already busy lives.

Shahbaz knows a thing or two about being busy. He has recently qualified as a GP and has a young family.

He has been volunteering as a Special Constable in the Burnley area since August 2016, helping the local neighbourhood policing team on patrols and on operations.

‘I decided to volunteer as a special as I wanted to give something back to the community. I want to be a role model and prove that you can be successful at what you do. I love the variety and the fact that no two days are the same.

I’ve already utilised my skills as a GP whilst out on a shift. Unfortunately a girl collapsed by the side of a taxi and I was able to give her medical assistance until the paramedics arrived.

The training is demanding and daunting, but it’s also fun. You get to meet people from different backgrounds and it’s amazing what skills you learn.

I would say to anyone thinking of joining – just do it, it’s like joining another family.’ 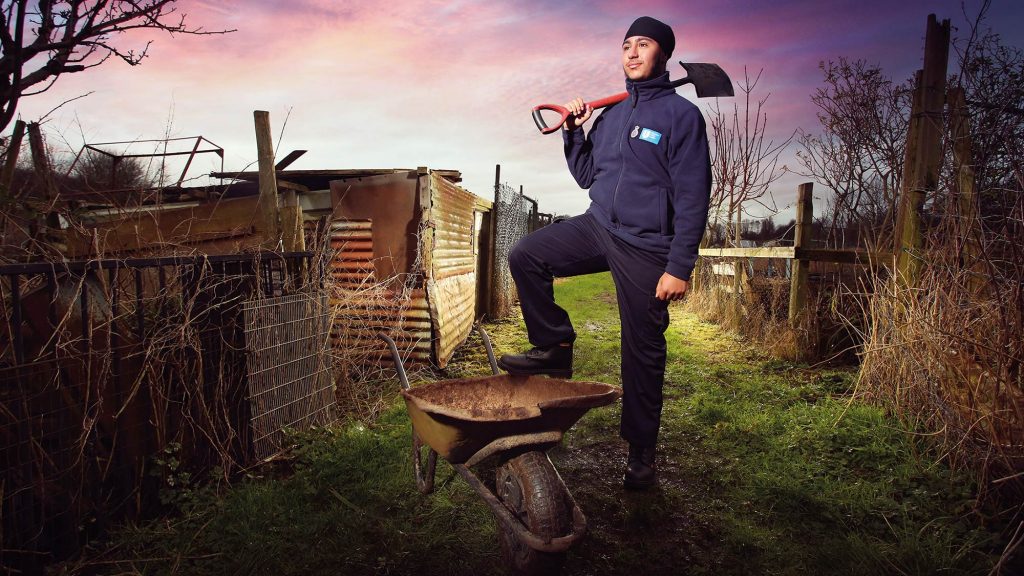 The Volunteer Police Cadet schemes run across the county, open to young people aged 13 to 18. The cadets get involved in lots of different activities to develop their skills and help their local community.

George has been a cadet since September 2016 and is a real asset to the cadet unit. He is very keen on maintaining his fitness outside of the cadets and attends the gym most days and also plays football in between studying hard for his exams.

‘I’m really interested in a career as a police officer in the future and particularly like it when we have guest speakers who can give me an insight into the force and the various departments.

‘My most memorable moment so far has been learning about and experiencing radio work.

‘We get to experience so many different aspects of policing and help the community, you never get bored.’

Keep up to date with the latest volunteering opportunities

We'll notify you when any opportunities become available that we think you will be interested in.